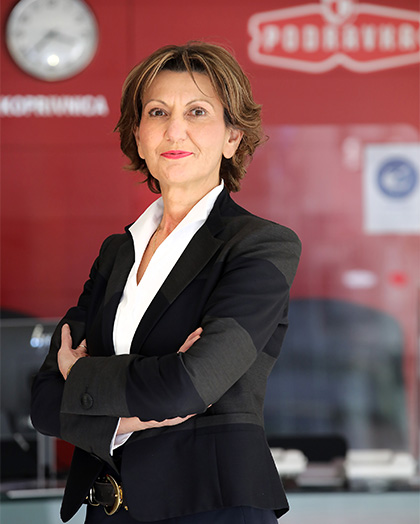 President of the SUPERVISORY BOARD and member of the audit committee

President of the SUPERVISORY BOARD and member of the audit committee

In 1991, she started her career as a junior researcher at the Faculty of Economics, University of Zagreb where she remained until 1995, when she joined the Ministry of Finance as a department head. From 1997 to 2000, she served as Assistant Minister of Finance for macroeconomic analysis and forecasting. In April 2000, she left the ministry to join Privredna Bank Zagreb as its chief economist, where she remained until January 2004 when she rejoined the Finance Ministry as State Secretary. In October 2005, she was named State Secretary in the Central State Office for Development Strategy and EU Fund Coordination. In March 2008, she was named Chairperson of the Management Board of Partner Bank Zagreb. She remained in this post until December 2010 when she was named Finance Ministry, and in December 2011 she was elected a Member of Parliament and served in this capacity until July 2015. In August 2015, she became a standing advisor for Public Finance Management in the International Monetary Fund, where she remained until October 2016 when she was appointed Vice-president of the Government of the Republic of Croatia, and Ministry of the Economy, Entrepreneurship and Crafts.

From March 2005 to May 2012, Dr. Martina Dalić also served as the deputy chief negotiator and as a negotiator on the negotiation team for the accession of the Republic of Croatia into European Union membership.

In her formal education, Dr. Martina Dalić graduated in economics from the Faculty of Economics, University in Zagreb in 1990, and she received her Master’s degree from the same faulty in 1994. In 2010 she enrolled in the doctoral study programme at the Faculty of Economics, University of Split, and in 2012 successfully completed the programme and obtained her Doctorate in the field of economics.

She is author of numerous expert and scientific papers.

member of Supervisory Board and president of the audit committee